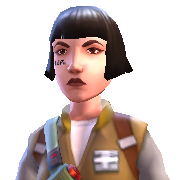 Kylia Stryder was a human female of unknown origin. A rebel group located in the Anoat Sector recruited Kylia as a teenager, despite her being the daughter of an Imperial Commander. It is assumed that her father never learned of her Rebel activities. Kylia was a skilled scavanger who aided in the Smuggler's effort to undermine the Iron Blockade.

Retrieved from "https://rebel-alliance.fandom.com/wiki/Kylia_Strider?oldid=953"
Community content is available under CC-BY-SA unless otherwise noted.